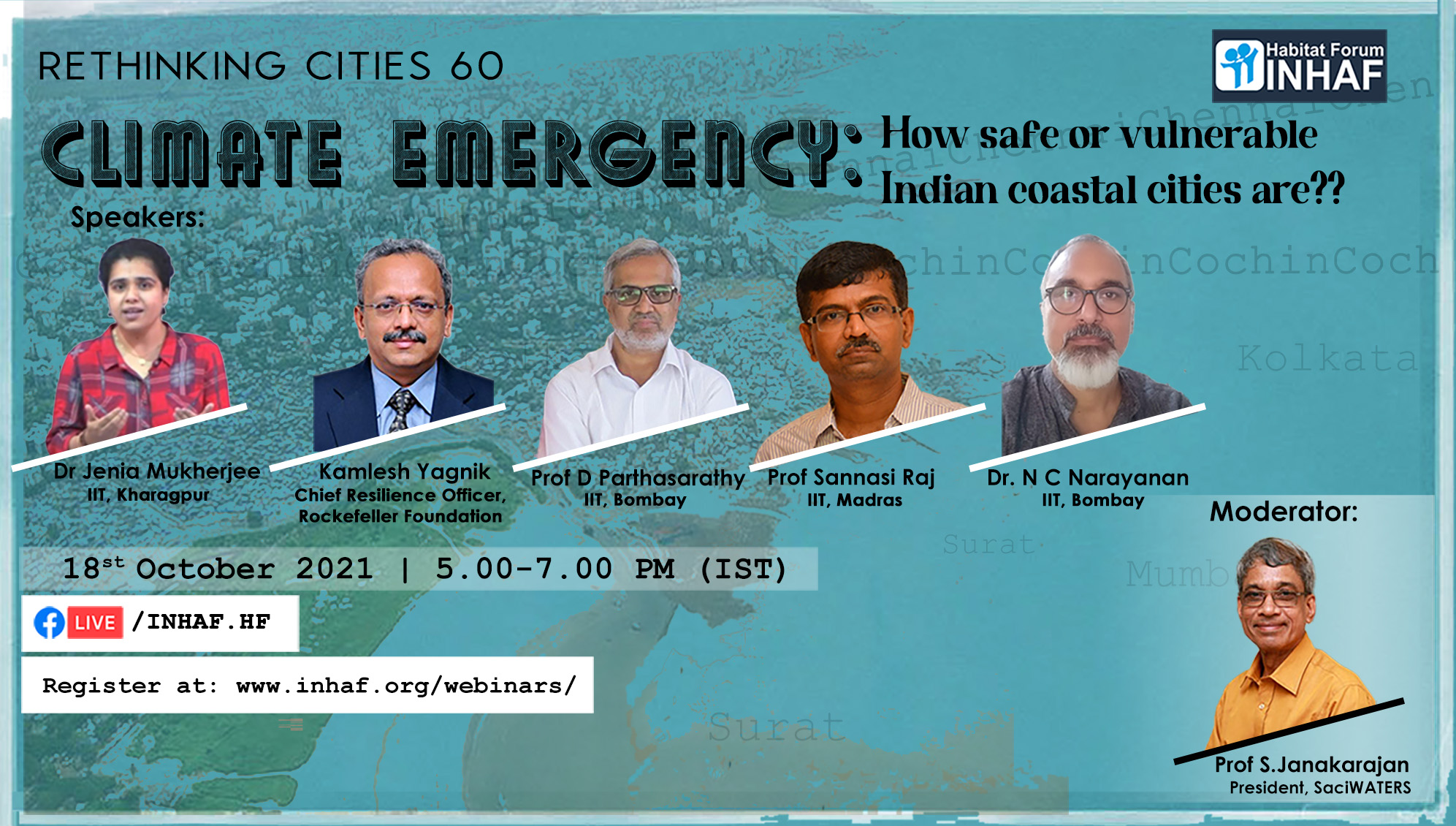 What are the emerging climate challenges that the cities are threatened with? Indian cities, in particular, are getting more warmer for several reasons such as shrinking ventilation (due to tall-rise concrete structures resulting in heat-trapping and creation of numerous urban heat islands), eroding open space and greeneries, and over and above all, increasing surface run-off after every spell of rainfall. The 6th Assessment Report of IPCC (WG 1, Physical sciences basis) indicates that coastal cities in the world will get more vulnerable due to Sea level rise (SLR). The report says, “both sea levels and air temperatures are projected to rise in most coastal settlements (high confidence); The report further  says, “The combination of extreme sea level, increased by both sea-level rise and storm surge, and extreme rainfall  /river flow  events will increase the probability of flooding (high confidence)”

When the COP 21 meeting was held in Paris in 2015, there were lots of hopes, particularly because the then US President Mr Barack Obama was very positive. But we all know what happened subsequently after the Trump took over the office. The Paris agreement fizzled out. The promise of keeping the global temperature well below 2 C and attempts to limit the temperature rise within 1.5 C now sounds like a joke. You know why? World’s 60 largest banks have poured $3.8 trillion into fossil fuel finance since 2015. Now the COP 26 meeting at Glasgow in UK in Nov 2021 is awaited with great anticipation as if this COP meeting will alter the entire climate threat scenario in a finite time. Nevertheless, global dialogue on climate change goes on but the conditions are seemingly getting from bad to worse.

The impact of climate change, on the already vulnerable Indian coastal cities, needs to be examined precisely in this context.

Why are we so concerned about the coastal cities?

– Coastal zone is becoming extremely dynamic and subject to lots of changes primarily due to anthropogenic activities and interventions – most important intervention being construction of mega ports and harbours. This has huge influence in coastal erosion and shoreline changes

– The coastal cities in India are more vulnerable due to very high population density and lack of open space due to increasing coastal flooding and coastal erosion.

– Most important, business centered and capital-intensive cities in India are located on the coast (Mumbai, Chennai, Kolkatta, Cochin, Surat, Vizagapattinam, Kandla, Bhaunagar, Mormugao, Mangalore, Tuticorin, and so on).

The key questions are:

1. How vulnerable the Indian coastal cities are for increasing coastal flooding, coastal erosion and sea-level rise? What will be the extent of land submergence due to SLR?

2. How sea-level rise may result in disruption in sea trade routes and trading among nations?

4. How are we going to handle this challenge? How prepared are we to protect the Indian coastal cities from sea-level rise?

5. Or, is the submergence of at least portions of cities inevitable? In which case, what will be the extent of damages and losses?

6. To what extent coastal ecosystem functions will be disrupted or wiped out due to Climate change?

7. To what extent bio-shields such as mangroves can help to mitigate sea level rise, coastal flooding, shoreline changes and coastal erosion?