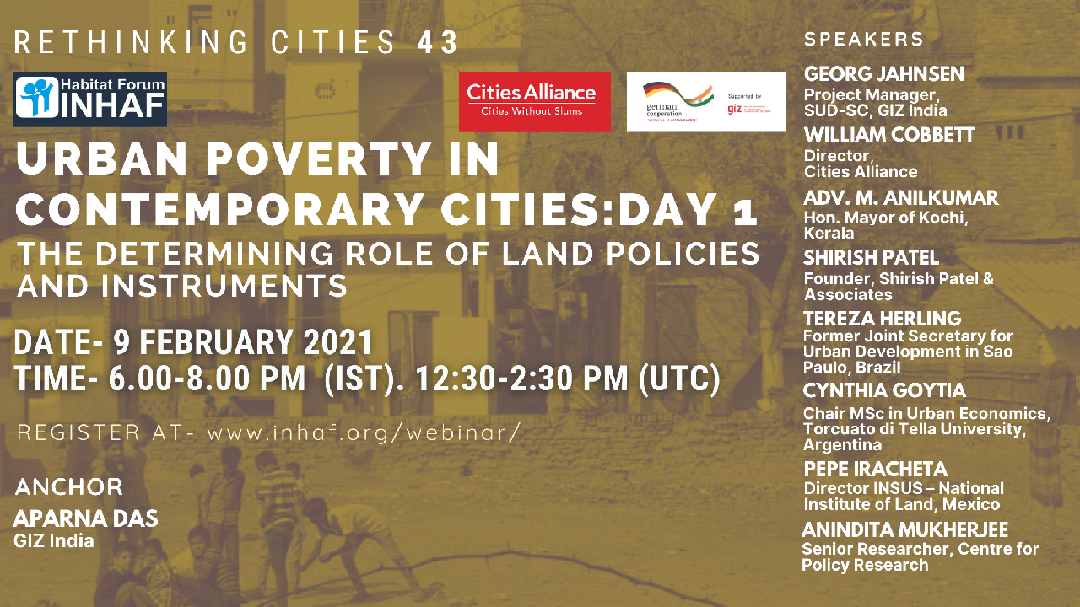 The Determining Role of Land Policies and Instruments

Discussions on urban poverty revolve around specific sites such as squatter settlements, resettlement colonies or public spaces that poorer groups use for their livelihoods.  These discussions have focussed on the difficulties that poorer groups have to access housing and/or work to generate an income. Housing is dominantly understood in policy and programmatic language more as a physical structure or to borrow Turner’s terminology as a noun or a product and less as a process or a verb.  Similarly, livelihoods tend to view through the lens of informal sector. Research on urban governance and poverty has illustrated the impact of land policies in reducing poverty in cities (Benjamin and Bhuvaneswari 1999, 2001, 2006; Benjamin et.al 2005; Raman 2010, 2011; Roy and Ong 2008), concluding that the democratisation of land access is critical to ensure the right to the city, and that no-one is left behind.

Subsuming the land question under housing, increasingly the State’s policies and programmes with respect to urban development and low-income housing have moved towards eviction and resettlement of poorer groups on the outskirts.  We argue that urban poverty process is to be situated within the wider politics of the ways in which we build our cities, rather than a sectoral focus such as housing. In India, between the years 1985 and 1994, policies addressing squatter settlements revolved around redevelopment. These policies were funded through Central Government programmes – the National Slum Development Programme (NSDP) in the mid-nineties, followed by Rajiv Awas Yojana (RAY) and the Housing for All Mission launched in June 2015. These have a dominant focus on house construction and developers among others have been instrumental in pushing the redevelopment schemes. Evidences from the ground establish that in situ slum upgrading is an affordable, flexible, and viable strategy in improving the lives of the urban poor, however, it has not got enough importance in the housing and urban policies. In the recent times, governments across the world are using National Urban Policies (NUP) as an instrument to define vision, guiding principles and set of linked actions to steer inclusive growth. The integration of aspects of spatial equity and procedural upgrading of slums into the NUP can be key to promoting sustainable urban growth.

Land has a central role in urban policy. It is not just a backdrop against which urban economic and social activities are enacted, but a tool in wealth generation. Land also has a broader social role. However, in India this has not been captured in the spatial land use policies yet. Land use planning remains limited as a technical exercise focusing on producing statutory plans as a product rather than a process. In the recent times there have been attempts to contemporize the discipline, but these efforts are not enough. Additionally, the use of land as a financing instrument has led to significant changes in the institutional and legal strategies to build our cities but not always in an inclusive manner.  In the current times, with the advent of new technologies and digital medium, it is possible to make urban planning processes better informed and evidence based. However, this would imply reforming the existing land legislations and spatial planning instruments. This aspect calls for urgent attention in public policies.

Globally, there has been increasing success in implementing inclusive policies for informal settlements. In some cities, such as Sao Paulo, the social role of land is recognised as critical to the success of slum upgrading. In Argentina, a series of efforts in recent years is providing the means necessary to urbanise slums – but more studies are needed to understand the effects of regularisation to the formal and informal land markets. Most Latin American countries have undertaken reforms in spatial planning legislations beginning 1976 in Chile with the General Planning and Construction Law. In South Africa, for example, there have been some very successful initiatives in which the urban poor have been given access to water, sanitation, and access to housing with significant impact on poverty. In India, the State of Odisha has implemented the biggest land titling program for urban poor in all small towns. The interconnection between titling, service provision, and upgrading yields better upgrading results and improves household health. The Kerala Government has initiated the LIFE Mission as a flagship programme for addressing the issues of homelessness in the State. It focuses on a multi-pronged approach of addressing the ground level real issues and aims to improve the quality of life in the State by not only providing homes with allied facilities, but also raising the standard of living through skill building, job-based training, employment opportunities and livelihood interventions.

The webinar on “Urban Poverty in Contemporary Cities: The Determining Role of Land Policies and Instruments” is part of a series organised by INHAF, with support from GIZ India and the Cities Alliance Global Programme on Informality. The two planned sessions will revolve around the issues of land accessibility, right to urban commons, urban development strategies and its impact on poverty using case examples from India, Latin America, Asia, and Africa, with input from global experts and academics.

The webinar will promote a dialogue amongst global stakeholders based on their own personal experiences, and participate in a moderated debate amongst other practitioners, academics, and experts. It will foster the discussion of lessons learned from international experiences.