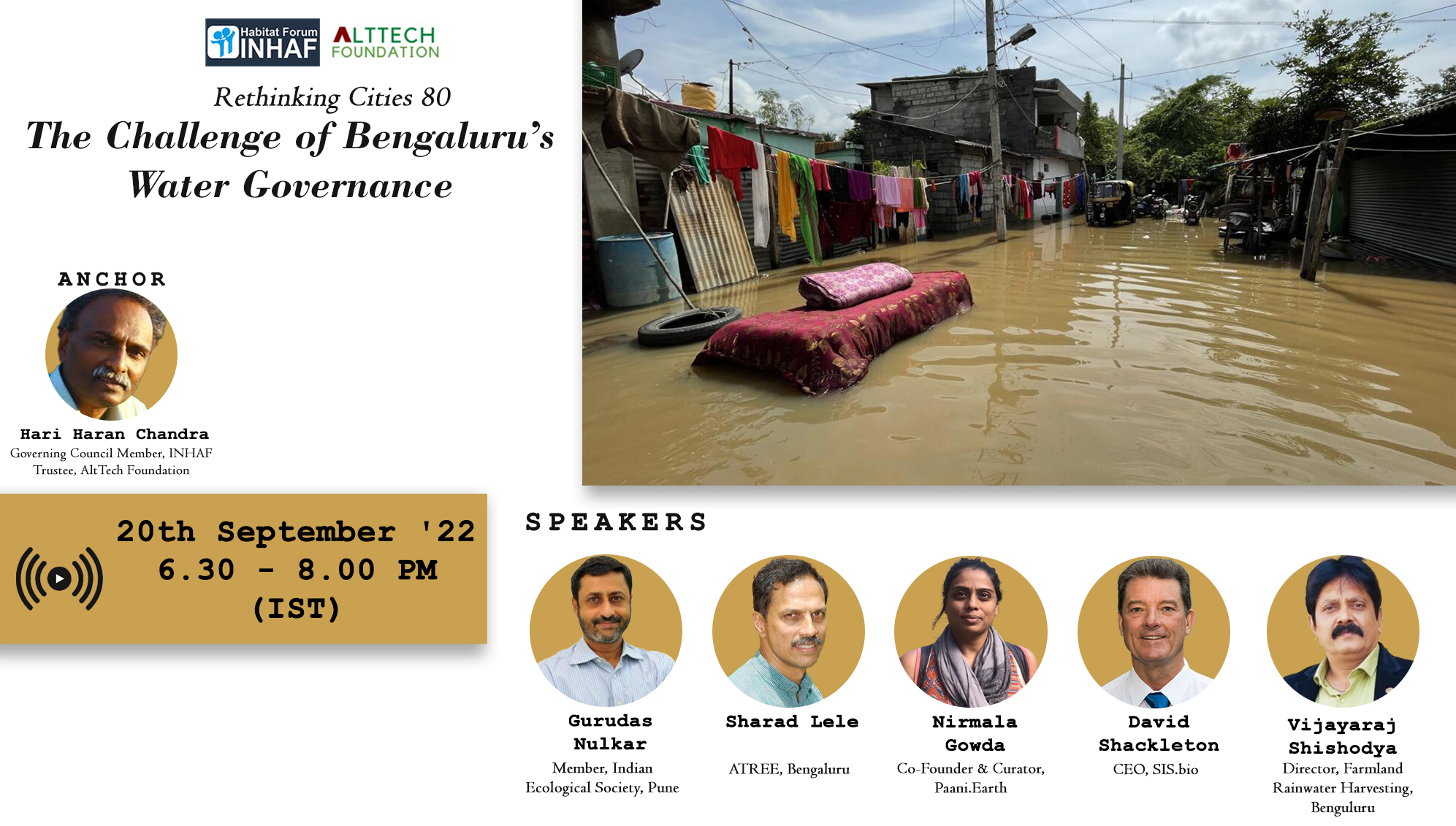 The Challenge of Bengaluru’s Water Governance

In a two-part discussion that brings together the decision makers and leaders of Bangalore, INHAF’s Rethinking Cities Series [Editions #79 and 80] bring you insights into the city’s state of current challenges on water [Sept 15], and what India’s third largest agglomeration can do to Water Governance Beyond Governments [Sept 20].

Bangalore hit national and global headlines with the deluge that had a large swathe of the east and southeast of the city mired in water. Thousands of families were evacuated. The poor suffered the most while whatsapp and media relished in showing pictures of families of the super-rich deserting their homes for a few days.

Where lies the challenge? Why was the city so poorly prepared? What are measures the BBMP—with a $ 3-billion annual revenue – has implemented over the years? Why were the rainwaters not draining out of the roads and the residential and commercial areas?

Is it that the city has received rains beyond the norm? This August the city saw 184 mm of rainfall this August 2022. It is reported to be the highest in four years. The city’s average August rainfall over the last 20 years is at 125 mm. Last year in the same month the city received a rainfall of 98 mm, while in August 2018 it was 158.3 mm.

The city’s drainage has desperately needed attention specially in the cascade of lakes to the east and south of Bangalore. In the 1990s the City had worked on a major project to improve the drainage from Koramangala across the IT corridor to Whitefield which is now called the IT Corridor. To the north, too, from further north of Yelahanka to the Manyata Tech Park and further down to Jakkur, a disaster is waiting to occur—if the waterways are not unclogged. There are CSOs working as activists but claim they are blockaded by either govt agencies or by companies who are the encroachers.

What should the city do to this natural cascade of lakes to ensure that the waterways or the network of natural canals are free and the larger drainage of the city gains greater resilience for the future? The choking of some of the lakes in such cascades, or the encroachment of many of the waterways, the kaluves and raja kaluves, have been part of the challenge. Town planners have looked the other way, builders have had a field day, is one part of the story. Builders have their defences, too.

The larger challenge, beyond the flood threats that the city faces, is the grim water supply situation. In 2108 a senior minister in the Congress cabinet in Karnataka said, “Bengaluru will not face any water crisis. Even in the summer, there will be no problem of drinking water.” He was reacting to a BBC News report entitled ‘The 11 cities most likely to run out of drinking water’.  Bengaluru featured second on the list of the world’s water-deficit cities.

So what is the reality? The city needs 200 crore litres. Less than half is provided by BWSSB, the water utility. The rest is drawn from borewells in a city that has arguably the fastest depleting groundwater table in the country at over 1500-2000 feet in many parts. All this in a city that enjoys an enviably even distribution of rainfall for ten months with over 15 mm rainfall at the minimum in each month.