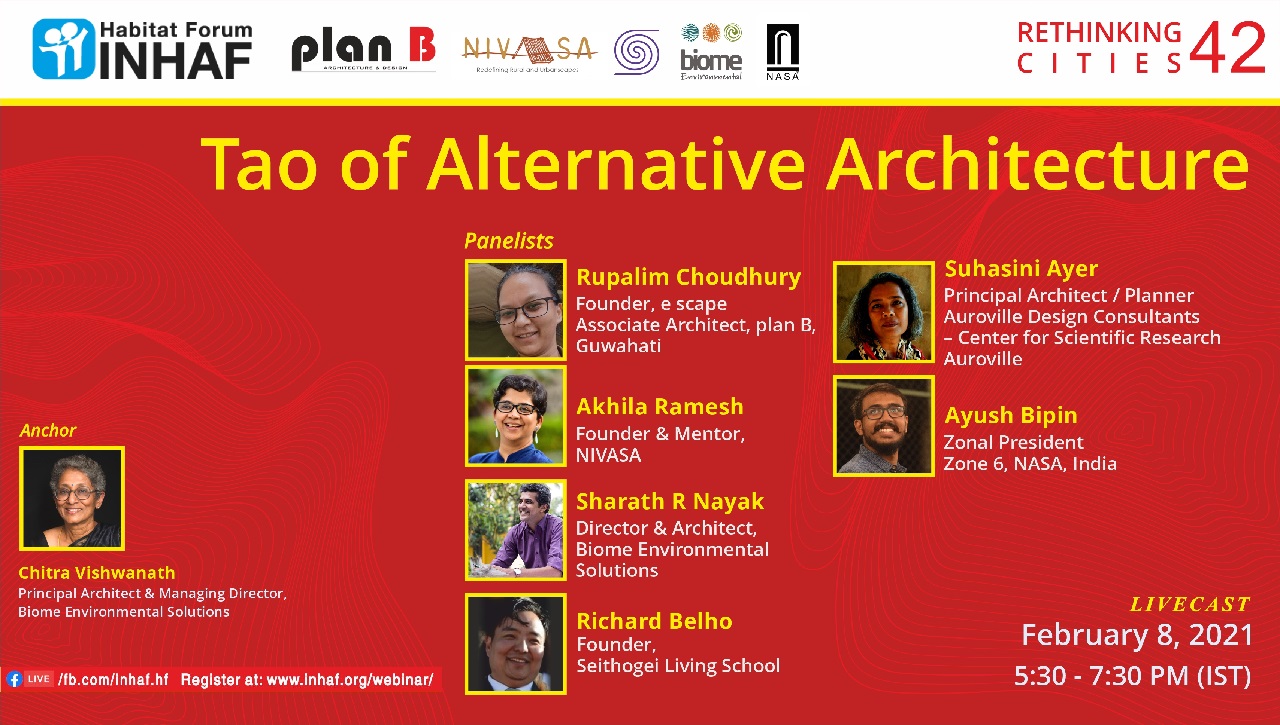 Paraphrasing Cobb from Inception the movie—

“What is the most resilient parasite? Bacteria? A virus? An intestinal worm? An idea. Resilient… highly contagious. Once an idea has taken hold of the brain it’s almost impossible to eradicate. An idea that is fully formed – fully understood – that sticks; right in there somewhere.”

In this Webinar, we have tasked ourselves to discuss ideas – ideas of various kinds…

Ideas on why the panellists in this webinar are doing what they are doing.

We discuss Joy of the choices they have made….

We discuss the Travails of the path taken… and

Finally, the financial rewards in the chosen praxis?

Thoughts and questions which haunt every student and graduate stepping into the world of design practice.

In this webinar five guests openly converse with the community on their journey. They elucidate the germ of the idea which made them take a certain path that was/is different from the otherwise mainstream practitioners.

We discuss further how these ideas which were/are construed then/now as being “Alternative” get subsumed in the mainstream. This absorption speaks much about the strength of these ideas.

CONCEPTUALLY ALTERNATIVE —Speakers bring to fore the position they take in society with respect to their sphere of concern, create possibilities of influence and act on it.

After competing her post graduation at AA Landon where one of  her dissertation was on Enclosure Design for animals in captivity: emphasis on Indian one horned Rhinoceros. Rupalim is now pursuing her Animal Welfare School of Extension and Development Study, Indira Gandhi Open National Open University. She is currently designing various animal enclosures in Guwahati Zoo.

Instrumental in setting up the NGO NIVASA which addresses the need of housing for the poor and construction workers in the Urban context at Bangalore. Nivasa strives to provide humane housing for the urban and rural poor. Akhila studied architecture at REC Nagpur with a Masters in both Urban Design and Project Management from National University of Singapore.

Sharath Nayak is a director at Biome Environmental Solutions . He graduated from Manipal University and M. Arch Chur Institute of Architecture, Chur, Switzerland. He joined Biome in 2002 and has lead design teams while contributing and furthering the conceptual framework of the office.

GEOGRAPHICALLY ALTERNATIVE—Speakers talk on the reason of picking the place of practice and how it shapes their concerns, influences, and actions.

Richard graduated from BMS College of Architecture Bangalore. He is practicing in Kohima Nagaland . He is a recipient of Bamboo Pioneer award from Balipara Foundation and other awards too. He is a social entrepreneur committed to sustainable economic development of the rural masses.

Suhasini is a graduate of SPA Delhi. She moved to Auroville in 1985 and since then she has created an indelible mark with her designs in the space of alternative and now engaged in planning for the future city while working through the various contingencies-political, environmental, and social.