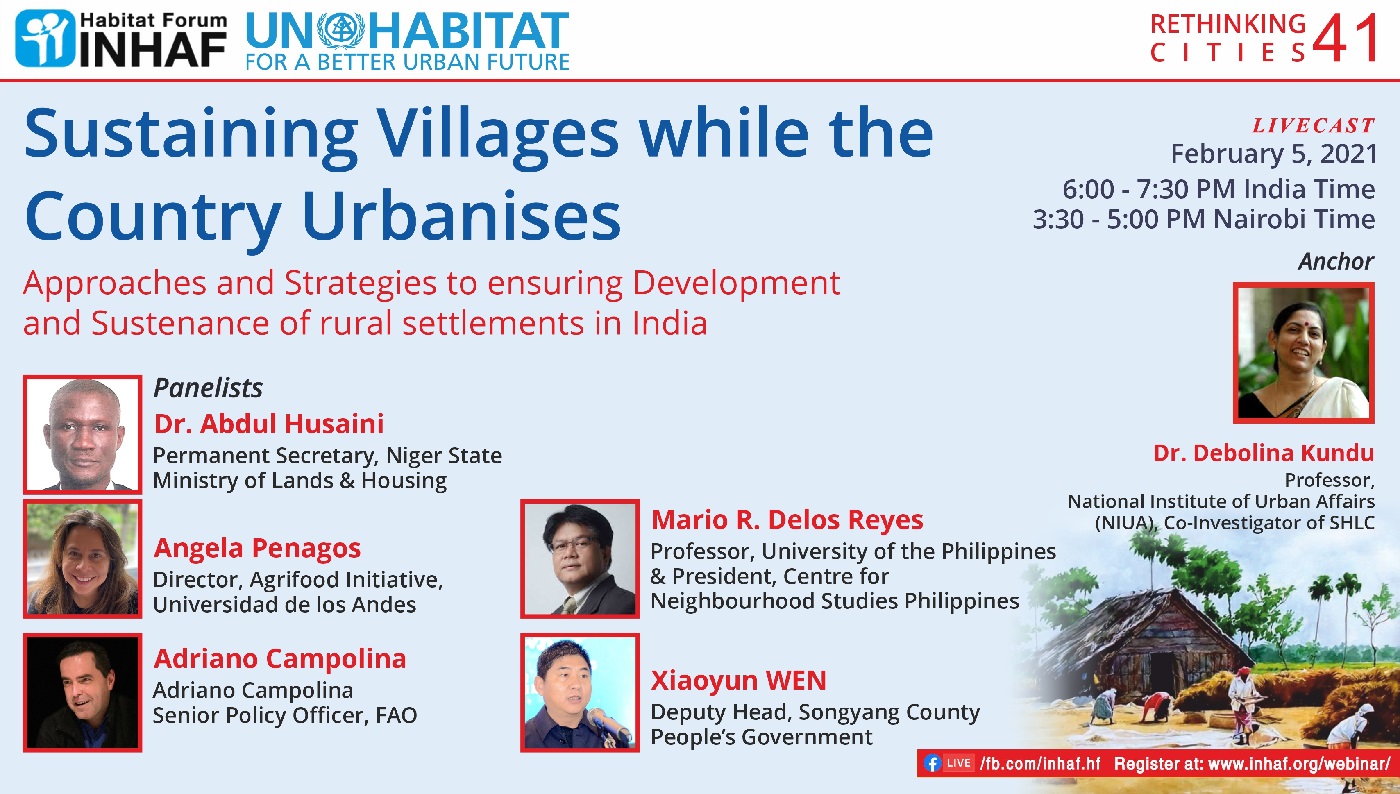 Sustaining villages while the Country Urbanises

As per the World Bank estimates, 65.56% of South Asia was rural in 2019. While attending to the complex urban challenge there is undoubtedly a need to address challenges of the still large rural sector. “Delhi Declaration” submitted to the GoI in 2016 says, “Asia in general and South Asia in particular are different from other parts of the globe in that a large portion of the population still lives in the countryside. Indeed, 68% or 850 million of India’s 1.35 billion people still live in 6,20,000 villages, their habitat is as important as that of 350 million city dwellers who live in about 7,900 cities and towns. Any urban agenda must therefore take in account the rural-urban linkages, inter-dependence and continuity. In short, what is required is support for simultaneous and complementary urban and rural development using indigenous and localized responses.”

Even if it is argued that the worrying signals that the rapid urbanization convey on the global sustainability front  and the need to optimise on the urban  productivity  justify the urban focus, the declining rural productivity, forced urban-wards migration due to rural economic distress, deficient  physical, social and economic infrastructure, possible ill effects of the climate change on agriculture activities and increased frequency and intensity of the natural disasters on rural populations, on one hand,  and relatively more sustainable ways of rural living, on the other, should ensure greater share of global attention  to the rural settlements.

The rural life in general and the rural settlements in particular are seen as neglected and in decline however it should be noted that significant investment is being  made to improve the quality of living environment and alleviate  poverty of the rural masses. In India, under PMGAY, Prime Minister’s Rural Housing Program, some 30 million rural houses are targeted to be constructed in the Indian villages by 2022, largely for the inadequately sheltered poor farmers, farm labour and other low income households.  Substantial investment is also being made in infrastructure improvement and development. Rural electrification, roads, irrigation, education and health facilities are being developed too. Over 100 million toilets have been constructed in the past few years, a majority of them in the villages, as part of the national cleanliness drive—Swatchh Bharat. On the welfare and development end, an ambitious rural employment guarantee program (MNREGA) helps millions of the poor earn some income, protecting them from hunger and destitution.

The urban-rural continuum has great untapped potential to significantly benefit the people who live in these places, and inclusive, planned and responsible actions are needed to deliver these benefits. In its draft, strategic plan 2020-2025, UN-Habitat has proposed “enhanced prosperity of regions” as one of its four focus areas, and improved spatial connectivity and productivity as a key outcome. The SDG target 11a has bought further attention to the topic of urban-rural linkages “The benefits of investing in connective infrastructure and services, while building capacity for inclusive and functional territories linking urban and rural communities, are immense in all three areas of sustainable development: economic, social and environmental.” The predominance of the rural reality cannot be denied or ignored despite heavy urbanization trends. Refusing to see the inter connections, inter dependence and continuity, in the silos mentality, is causing much damage.

This webinar is being jointly hosted by INHAF (Habitat Forum) and UN Habitat.  The webinar will look into the following questions-

1.  How has a government scheme/policy/initiative contributed in bridging the gap between the urban and rural sector by sustainably and inclusively improving rural infrastructure and economy?

2.  What is the role or attitude of national, state, local government agencies and community in its implementation?

3.  What are the examples that showcase innovative use of local technology, practices and resources to overcome the challenges faced by the people of the region thus improving their quality of living?