Home Webinar Supporting and strengthening civil society in addressing the urban challenge: How can CSR/philanthropy help? 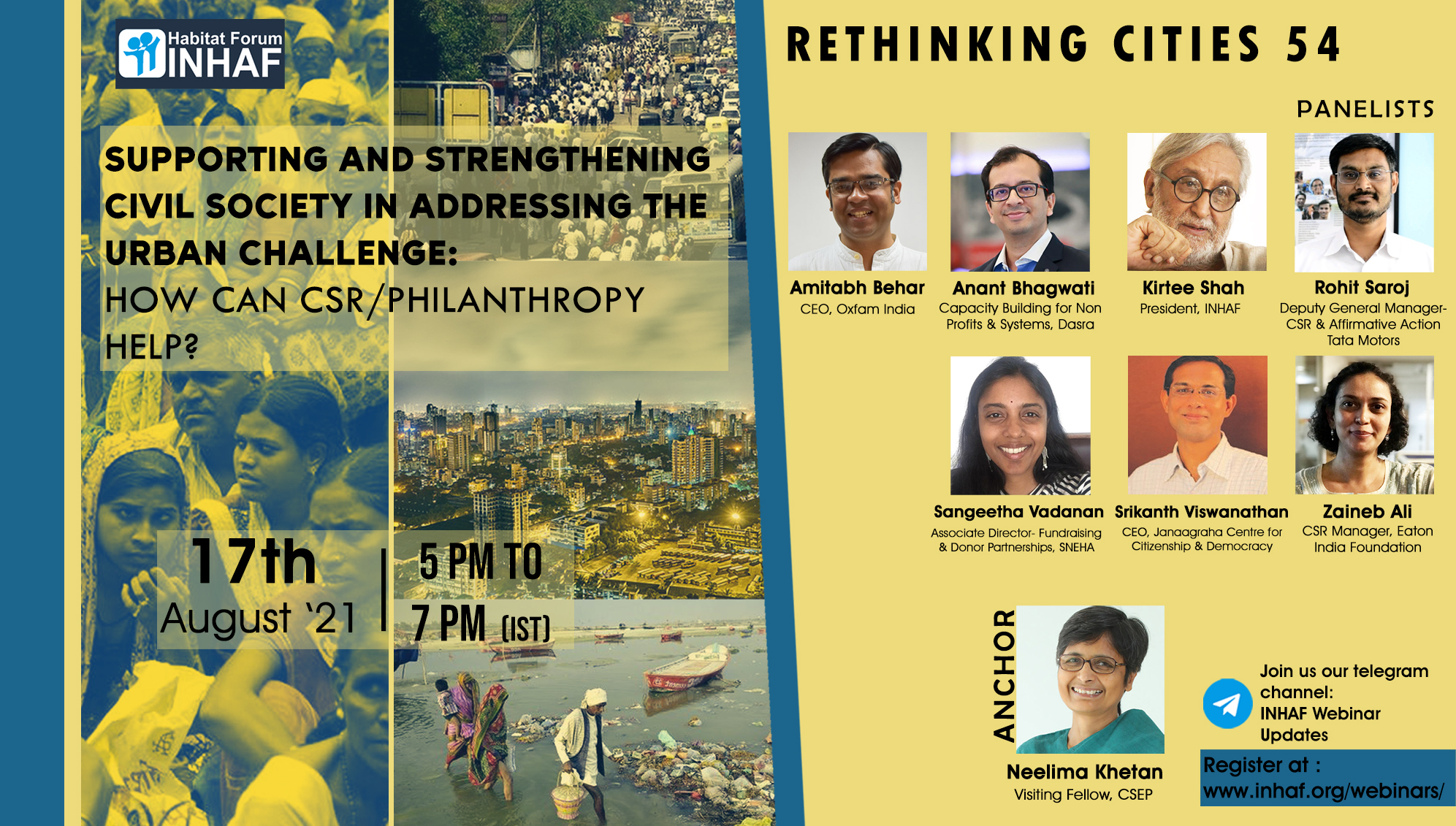 On the one hand, urbanisation seems to hold great promise. By 2030, 70% of net new employment will be generated in cities, where 70% of India’s GDP will be produced.

However, wealth distribution in urban areas is much more unequal than in rural areas. At around 70%, the extent of informality in urban employment is very high. Fifty percent of those in urban informal employment are wage workers. There is a big overlap between informality and poverty. For instance, the slum population in India is 65.5 million, over 17% of the urban population. Thirty-four percent of slum habitations do not have a toilet within.

The urban informal sector renders some of the most valuable services to cities, from domestic work to solid waste removal and recycling. Yet, city planners and well-to-do urban residents are often hostile to informal sector workers and their habitations in the city.

With an ever-expanding water and carbon footprint, rampant pollution and very poor air quality, with rivers becoming drains and urban commons disappearing, urban India is far from sustainable, at a time when we are no longer faced with climate change, but climate emergency.

It is critical to find solutions to some of these pressing urban issues while putting systems and institutions in place for sustainable urban economic  growth and  equal opportunity for all citizens, while ensuring healthy and liveable settlements for all people, and conserving environmental resources.

City governments, the private sector, investors, entrepreneurs, planners and other professionals are engaged in seeing that the “city as a place” is liveable, efficient, productive and adaptive to future growth. But putting the “city as people” upfront requires a different ‘development’ lens while planning and developing a city, which city governments and formal institutions do not always have.

As India’s urbanization enters a critical phase, many more such organizations and individuals are needed. The capacity building of urban civil society– in the form of many more such groups and agencies; more financial resources for their work, demonstrative action and research; more staff and volunteer manpower and their enhanced professional competence– is the need of the hour.

Corporate Social Responsibility and philanthropy are relatively new resource bases for strengthening civil society’s role in India’s urban transformation. Given that most of the leading corporates are situated in the large metros, an engagement with urban issues brings corporates into the conversation surrounding their own neighbourhoods. The urban challenge is in many ways tomorrow’s challenge, and an area that is (especially post-COVID) asking for our engagement ever more urgently.

This webinar will look at the role of civil society in addressing the urban challenge and how CSR/ philanthropy could support it.

The webinar will explore the following questions –

– As we become more and more urbanised, what kind of challenges do we foresee, not merely from an infrastructure point of view, but from a societal and human point of view?

– How can we prepare to respond to these challenges? What can governments do? What can civil society groups do? What can corporates and philanthropic individuals & organisations do?

– Are there enough civil society groups working on these issues? How can they be strengthened further?

– What will it take to attract greater CSR/philanthropy funds to support civil society organisations working on urbanising India’s problems and their solutions?

– Apart from financial resources, what else can CSR/philanthropy bring to the table?