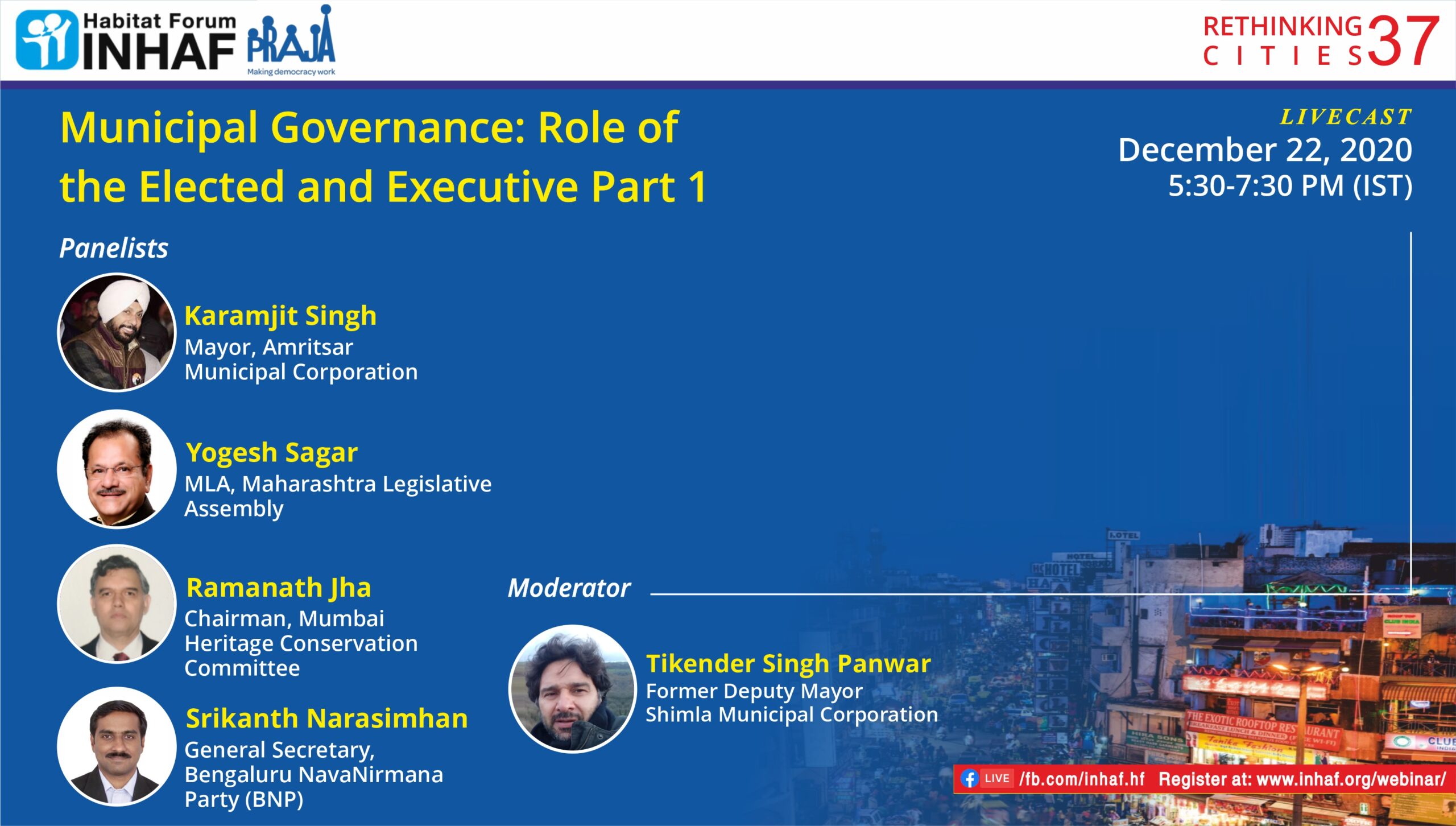 Municipal Governance: Role of the Elected and Executive- 1

After 70 years of republic and relatively slow rate of urbanization that   will  place some 840 million people  in over 7900 cities and towns by 2050, doubling of the current urban population in just 30 more years, out of the three levels of government –national,  state and local—the municipal government looks the weakest. The 74th Constitutional Amendment, after a quarter century of enactment that gave constitutional status to the local government, seems to have done little to empower the municipal corporations and municipalities. Meeting infrastructural and basic services need of the growing population and expanding boundaries with limited funds, weak resource base—taxation, transfers from the upper level of governments, borrowings, etc.—and limited authority  is getting increasingly difficult. Cities, seen as engines of economic growth;  centre of global economy; and seat of knowledge, culture,  technology, institutions and innovation  are struggling for resources—both  financial and human–  to keep their house in order and meet their primary obligation of ensuring reasonable standard of public health, hygiene and quality of living environment. Growing population; housing stress; pressure on infrastructure and services; air, water and noise pollution; overcrowding and congestion; unplanned growth; water, waste, transportation and energy issues; challenges of informal settlements, informal economy, poverty and rising expectations of the people in face of limited intuitional capacity and inadequate authority of the local governments, among others, have emerged as the key issues of urban governance.

To ensure a reasonable quality of living environment to its citizens, both in place already and coming in––a city is a dynamic place, ever growing, expanding and changing—and continue playing its engine of economic growth role properly—the urban sector accounts for more than 65 percent of the country’s GDP already –the cities must remain efficient and productive. And therefore its governance, through municipal bodies, must improve decisively, urgently and in all manner—political power and authority, financial resources, institutional capacity and organizational accountability. Better, liveable, safe, healthy, inclusive and performing cities need empowered local governments.

How to do it is the matter to be discussed in the webinars 37th and 38th, on 22nd and 23rd December, 2020 ,  under the title “ Municipal  Governance: Role of the Elected and the Executive ”by eminent panels consisting of the mayors, ex mayors, senior government officers councillors, urban professionals and experts.

Some of the issues to be discussed include the following:

1)  Modern-day pressures on a city, be that population growth or need for resources to augment infrastructure and services or manage atmospheric pollution or prepare for the climate change are formidable. Is the municipal structure, in charge of governance, as it exists and functions now, equipped to cope with the challenges? What changes are needed?

2)  The municipal body is the local government—often with wide geographical areas and large populations to be managed and governed. The power, authority, resources and mandates do not look adequate in the context of the new challenges. What changes, modifications, reforms are needed?

3)  The political system, elections, representative democracy, functions and power of the elected body, tenure and role of the mayor , committees and the councillors, the executive wing by the nominated government officers and the system of SPVs that is in vogue to implement big projects are being debated. Some cities have mayor in council system. Examples of powerful mayors of developing country city mayors are quoted. The new reality demands a fresh look at the entire system: what is being done? What trends for change are emerging?

4)  Municipal finance is stressed. Money is not enough to meet investment, maintenance and administrative obligations. The conventional instruments of municipal finance such as taxation, government transfer, special project funding through borrowings and other means look inadequate. Even innovative approaches like market bonds have not been a great success—neither been replicated or up-scaled sufficiently. What other means and approaches are being considered, readied?

5)  74th Constitutional Amendment: Why it is not in place properly after quarter century of enactment?  What are its pluses and minuses?

6)  Informal settlements and informal economy have surfaced dramatically as key challenges of the cities through the lockdown. Their living and working conditions, livelihood and income, need for the space and right to the city are issues that demand not only debate but workable, viable and affordable solutions. How are these being handled and what role the local bodies have and are playing?

7)  Poverty alleviation and job creation are not the traditional areas in the municipal domain. The local body looks most suited to handle them. UCD arm of the municipal corporations have been forgotten or side-lined or undervalued. How to equip the municipal bodies for these tasks?

8)  Urban Employment Guarantee Scheme or the Right to Work on the lines of MGNREGA is being debated, more vigorously following the Covid lockdown and migrant worker crises. The local bodies will obviously have big role to play. Are they equipped?

Previous StorySector based Pooled Finance Mechanisms for Urban Infra Financing
Next StoryMunicipal Governance: Role of the Elected and Executive- 2