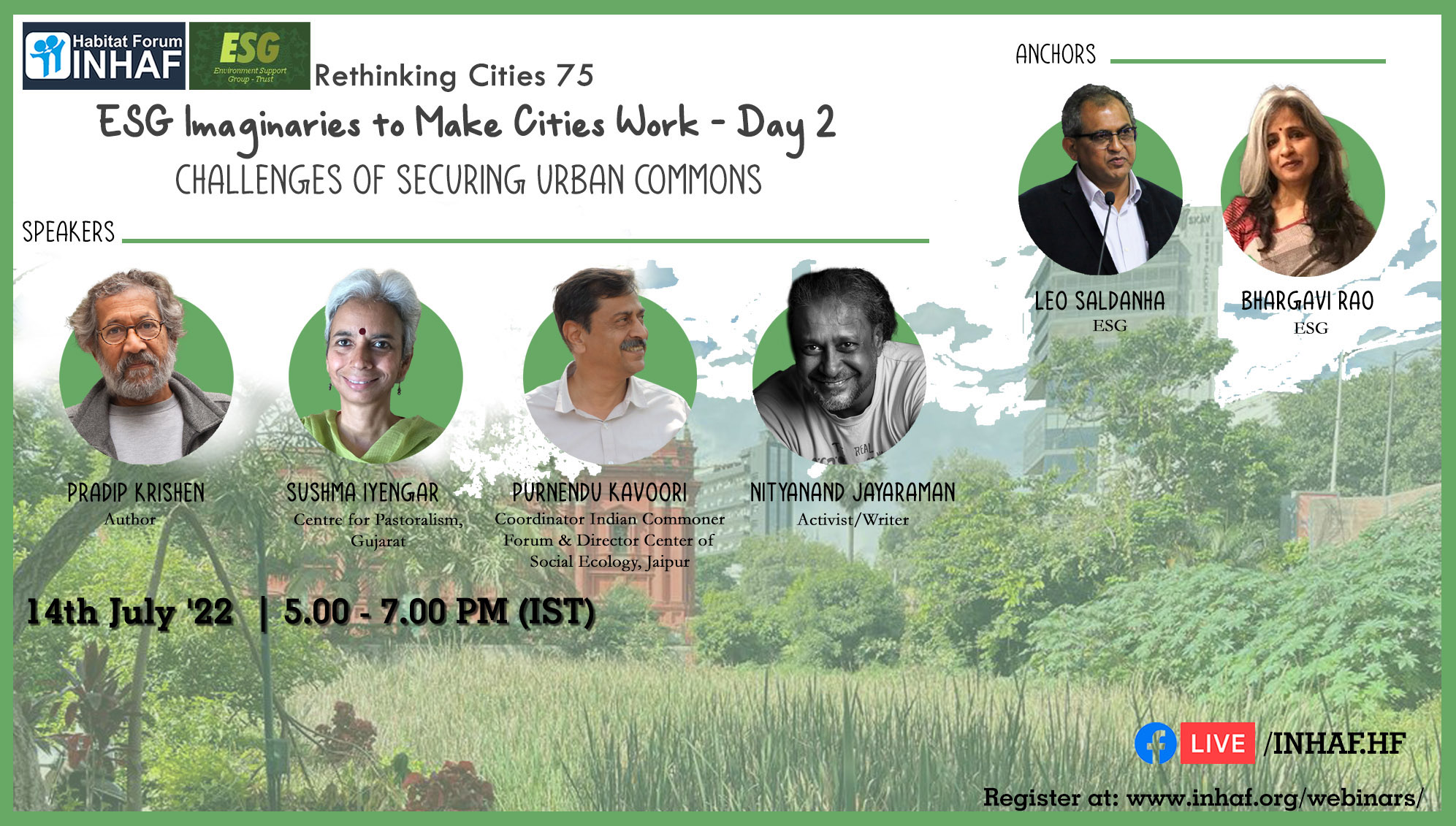 For over two decades, ESG has focussed on emerging urban environmental and socio-economic challenges and worked with multiple communities, government agencies, academia, media, etc. in attending to these issues and conflicts. The approach has always been about finding viable and inclusive solutions to vexatious problems by advocating deeply democratic processes which draw on  intersectoral, interdisciplinary, intersectional experiences, and knowledge and histories. Bangalore and other cities are in a mess today as they follow highly centralised governance approaches which drift away from Constitutional mandates and legal provisions that require decentralisation of administration and devolution of power.  As a result various local publics do not find their due place to imagine their futures, which are then collated to build the collective imagining of the city and its future.

In ESG Imaginaries to Make Cities Work, participants drawn from diverse disciplines and sectors would reflect on the sort of issues and concerns that have become systemic to urban governance and living, reflect on the initiatives of ESG in addressing them, and articulate ideas and imaginaries in constructing better futures, and of consequences if we were to not make such efforts.

One of the greatest challenges of urbanisation of our times is that commons are increasingly encroached and are highly contested terrain.  While urban poor are compelled to occupy these commons out of sheer necessity for housing and livelihoods, various Government and Judiciary appointed Committees report that encroachments are predominantly by politically powerful real estate lobbies.  As and when there are efforts to reclaim commons, those without agency fail to secure their rightful advantages. As the politically well connected and corrupt choose to encroach the commons, or when agencies wilfully neglect their constitutional mandate to protect and maintain them for the benefit of residents and future generations, and find ways to privatise them,  the resulting loss of ecology, social privileges and traditional uses of the commons creates predatory urbanisms where those with power succeed and those without lose. Of late, the mere reliance on rule of law creates problems as such rules are developed by elites and those promoting majoritarian ideas of the construction of a city. This aggressively and actively  disprivileged the poor, who were compelled to encroach on commons out of sheer necessity of housing, or ghettoised the minorities. At the same time, such policies create  opportunities for the privileged, who secure political and administrative patronage to utilise the resources of the city for their private good, such as parks and open spaces, and river fronts and lakes as a right based on their restrictive claims to such spaces.  Such discordance relating with the commons is also represented in how streets as commons are claimed as a privilege of the well heeled, to the loss of the street vendors who find themselves at the wrong end of the rule stick often enough.

ESG has worked with this problematique of the commons and demonstrated how securing them can be a win-win for all. Working with communities to resist privatisation of commons, such as lakes, and then asking for a policy to protect them with Public Trust Doctrine and the principle of intergenerational equity  as the basis, has resulted in path breaking outcomes – rehabilitation of lakes as inclusive commons and as sacred spaces that deserve community and statutory protection to advance ecological and water security.