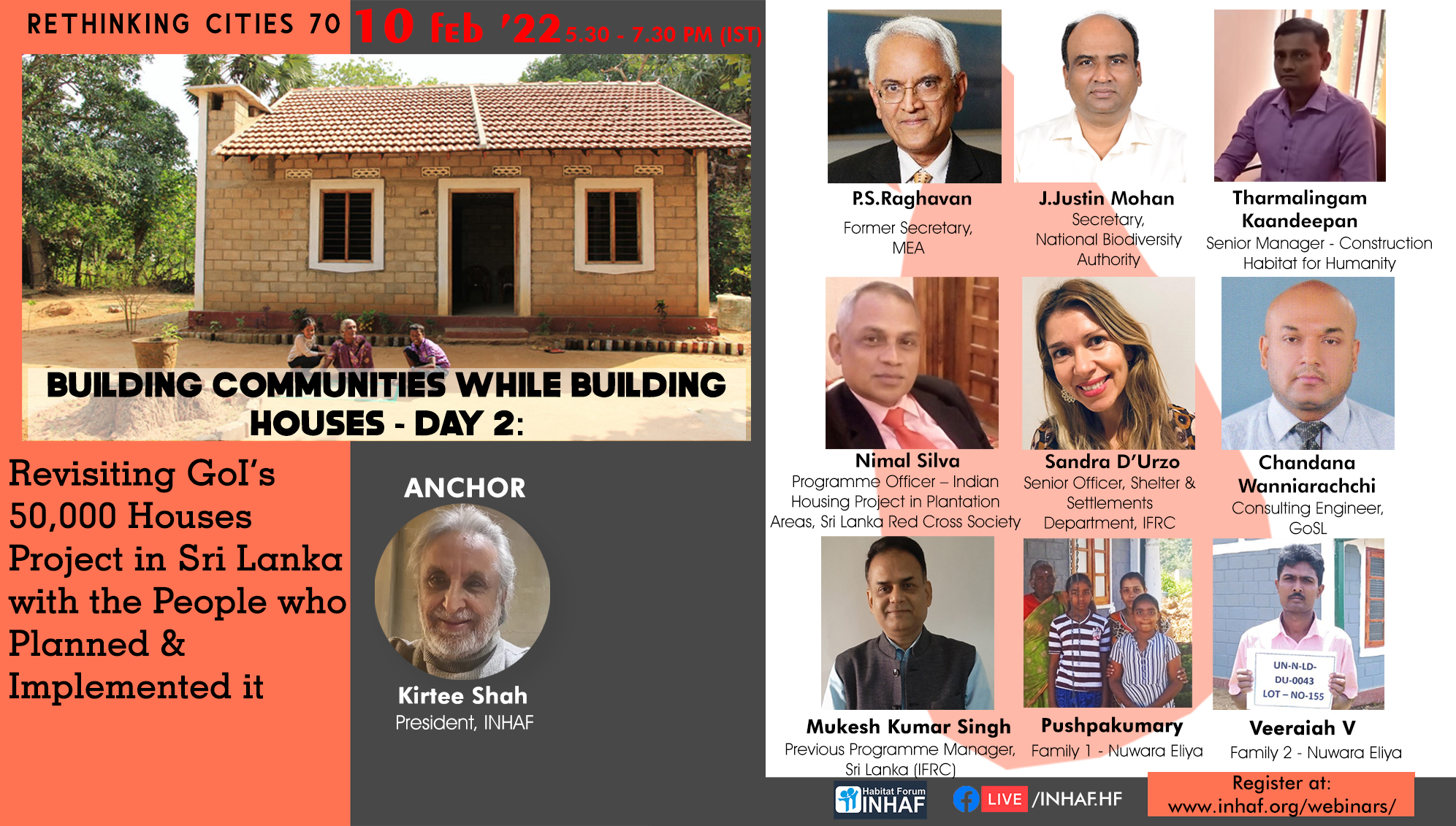 Building Communities while Building Houses – Day 2: Revisiting GoI’s 50,000 Houses Project in Sri Lanka with the People who Planned and Implemented it

The GoI’s 50,000 houses project for the conflict victims in Sri Lanka ( 2012-16), in the manner of its planning and implementation, remains a special project globally. Conceived, funded, and implemented by the government, it is more than a conventional ‘’participatory’ project. Going beyond, this GoI project transferred decision making to the communities and handed over the funds to the owners to build their houses in a foreign country and in a turbulent post-war uncertain environment.  Also put in place institutional innovations and organizational support system that ensured transparency, accountability and optimal performance by all stakeholders and facilitated people’s creative engagement that made them see the house not only as a place to live but a foundational acquisition to build a new future on. The project avoided commercial contractors. Not only that saved money for the home owners, the substitute self- help gave them a much needed self-esteem, dignity, and a new spirit that task completion and goal achievement delivers to all.

What is remarkable about this project is that it happened on a scale and in the trying conditions and difficult circumstances: 50,000 houses; 400/500 sites; investment of over  Rs.1500 crore; a foreign country; war torn provinces, villages, economy and systems; trust deficit in a social environment and political uncertainty. What is noteworthy is also that the cooperation and co-working between the two governments was smooth and that the project happened in a time bound manner, with good quality houses, satisfied owner, an environment of peace and spirit of hope.

There is much to learn–even celebrate–about this project:  that it can happen; that a government project can do it this way–the people’s way; that a disaster reconstruction project can deliver more than just the physical infrastructure; that communities could be built while building houses. That a housing project could also be a ‘development’ initiative.

What is special about the two part webinar is that many of the key actors who conceived, designed and implemented the project will be there to tell the story: the current and the retired officials in the Ministry of the External Affairs of GoI and the Indian High Commission office in Colombo; those who facilitated owner participation and contribution (the Implementing Agencies); the concerned officers from the Government of Sri Lanka who played multiple roles from the beneficiary selection to infrastructure development, and some of the proud owners of the houses, men and women, who constructed their houses and are living there now.

From such milestone projects, there is much to learn from–on international aid, on government intervention, on disaster reconstruction, on affordable housing, on community participation, and on converting such infrastructure and assets creating opportunities and investment in capacitating people and in triggering a sustainable development process.

The webinars are organized by INHAF (Habitat Forum) and facilitated by the High Commission of India, Colombo.

1.. Sri Lanka, the island nation, closest to India in the South, witnessed one of the worst armed conflicts for over four decades between the governmental forces and the rebels. This armed conflict finally ended in May 2009 but in the final phase of the conflict, a large number  of families were affected due to loss of life and property.

2. The Government of India implemented various development projects worth USD 1.8 billion for the Internally Displaced Persons (IDPs) of Sri Lanka at the end of the armed conflict. A Development Cooperation Wing was established in the Indian High Commission at Colombo to coordinate the relief, rehabilitation, and development of war affected areas in the Northern and the Eastern Provinces. The hallmark of these humanitarian efforts was the implementation of the Indian Housing Project involving the construction of 50000 houses for the war affected families who lost their houses during the conflict and were staying in temporary shelters and camps established by the government.

3. The Indian Housing Project implemented at a cost of USD 500 million was apparently the largest grant assisted project undertaken by India in a foreign country. The Project was implemented at a crucial phase of reconciliation that offed the affected families not only the homes for a living but also a ray of hope for the future. The Project was implemented under an owner-driven approach where funds were given to the beneficiaries in four installments. Every beneficiary was entitled to receive SLR 5,50,000/- for the construction of a house with a plinth area of 550 sq. ft. Objective criteria were  designed to select the beneficiaries through a  transparent system which ensured that only the most vulnerable families benefitted. Four agencies viz. UN-Habitat, International Federation of Red Cross (IFRC), Habitat for Humanity, and National Housing Development Agency were engaged to facilitate project implementation.  Five Indian-based banks functioning in Sri Lanka were engaged for the transfer of funds to the beneficiaries in different districts.

4. The Mission in Colombo oversaw the implementation of the Project with the help of officials of the Government of Sri Lanka and the office of the Consul General of India in Jaffna. Funds were released directly to the beneficiaries by the Mission based on certification of the completion of a stage of construction. The Indian Housing Project is a landmark Governmental Project undertaken at a very crucial phase in the history of Sri Lanka. The speciality of the Project was the involvement of various stakeholders working in harmony to ensure successful completion of the Project without any pilferage or leakages.

4000 houses in the third phase of the project are being implemented through a community driven approach.