I am Anindya Sarkar

I am Anita Reddy

Anita Reddy is an Indian social worker from Karnataka and the founder of Association for Voluntary Action and Services (AVAS), known for her services for the rehabilitation and upliftment of the slum dwellers in Karnataka and Andhra Pradesh.She is the managing trustee of DWARAKA and DRIK foundations, working for childrens education and womens livelihoods. The Government of India honored Anita Reddy in 2011, with the fourth highest civilian award of Padma Shri.

I am Anjali K Mohan

Dr. Anjali Karol Mohan is an urban and regional planner by profession with a PhD in urban e-governance from International Institute of Information Technology, Bangalore. Her broad areas of practice and research include development, urbanization and urban management, public policy and information and communication technologies and development (ICTD). Over the last two decades, Dr. Mohan has successfully completed several assignments in her individual capacity and as part of multi-disciplinary teams. She has engaged with various urban planning and management exercises, both as a team leader and a team member, evolving planning tools and evaluating plans to enable inputs into policies and effective planning exercises. In particular, her experience has been in governance, public policy, institutional and organizational frameworks and training and building capacities. In addition, Dr. Mohan has designed and delivered several training and capacity building programmes, both for the state and non-state actors.

I am Banashree Banerjee

Banashree Banerjee is an urban planner based in New Delhi, India. She works as an independent consultant and also teaches at the Institute for Housing and Urban Development Studies (IHS), Rotterdam. In a career spanning three decades, the focus of her work has been on inclusive approaches to urban planning and management. This includes supporting local government in India, Egypt and Bangladesh for participatory planning, slum improvement through partnerships, and making city land available for the poor, as well as inputs into policy. Banashree has several publications to her credit and has undertaken assignments such as Panelist at the World Urban Forum 2010, Rio De Janeiro, Chairperson of the International Jury for the UN-HABITAT best Practices Awards in 2008; working group member of the Global Commission for Legal Empowerment of the Poor in 2007 and member of the International Expert Group on Land and Housing of UN-HABITAT

I am G Shankar

G. Shankar (born 29 May 1959 Arusha, East Africa) is an architect from Kerala, India. Gopalan Nair Shankar is his full name. He advocates the use of locally available materials, sustainability, eco-friendliness and cost effectiveness.He founded the Habitat Technology Group, Thiruvananthapuram, in 1985, and is still the chief architect of the group as of 2012, and serves on a number of boards. He has also won the prize for the best architect in Kerala. His attitude to "green architecture" has gained him a reputation as the "people's architect". Shankar has been awarded the 2011 Padma Shri by govt. of India

I am Indira Dasgupta

Indira Dasgupta serves on the Board of Directors of International Association for Volunteer Efforts (IAVE), the lead international organisation to promote and showcase the spirit of volunteering. She is also the Executive Director of PIDT (Peoples Institute for Development and Training), which has worked towards developing a holistic intervention strategy and has an exemplary role in civil society action in rural North India amongst the marginalised for the last 3 decades. She has been instrumental in organizing the IAVE Asia Pacific Conference in 2001 and the IAVE World Volunteer Conferences in 2006 in close association with the UNV, bringing together diverse stakeholders in volunteering from 58 countries. An architect, urban planner and housing expert Indira has been working as a social change interventionist. She is a member of a number of issue based network organisations in India, working at the grassroots on issues of water, forests, food security, women, youth, education, folk culture, housing primarily volunteering to motivate collective action for sustainable change.

Since 2005, have been working as Executive Trustee of CIVIC Bangalore (Citizens’ Voluntary Initiative for the City of Bangalore). CIVIC has been working since 22 years for the proper implementation of urban governance law, the Nagarapalika Act and more recently on the Right to Information Act to bring about decentralisation, transparency, accountability and people’s participation in urban governance. In the last nine years, CIVIC has been working with the urban poor to enable them to access their basic rights to food, water, sanitation, housing, health care, education, etc

Concerned that the ‘architecture’ he was learning at one of the best schools in the country, way back in the ‘60s, was not sufficiently oriented to the contemporary human settlements challenges, especially concerning the needs of the poor and the marginalized groups, Kirtee Shah set out out to work with the homeless poor in the villages first and subsequently in the urban slums of Gujarat, India. The search for ‘content and social relevance’ in professional work, the desire to serve the ‘alternative client’ and an attitude to de-learn and re-learn in face of new challenges have shaped Kirtee Shah’s 45 year long professional career in six parallel and overlapping streams that include architecture practice,grass roots work as an NGO, policy advocacy and development,disaster,reconstruction, institution development, and project consultancy. Besides studies, field projects, organization development and policy related work in rural, urban and tribal housing for the low income and other disadvantaged groups, he has worked extensively on large scale post disaster reconstruction projects in India and abroad. As a member of the Prime Minister appointed National Commission on Urbanization (NCU) in the mid 80’s, he chaired a Working Group on Urban Poverty in India. Founder Director of Ahmedabad Study Action Group (ASAG; an NGO he set up with other likeminded colleagues and leads for the past 45 years) he was president of Habitat International Coalition (HIC; a global coalition of civic groups, activists and professionals working on the housing rights and the people centred urban development) for a decade in the mid ‘90s. He is founder president of India Habitat Forum (INHAF); founder chairman of Home Losers’ Service Association of Ahmedabad(HOLSAA; set up following the earthquake in Gujarat in 2001); president of Banglore based Institute for Cultural Research and Action (ICRA) for the past 25 years; one of the founders of the Ashoka Innovator for the Public, which now has presence in more than 70 countries of the world, and is engaged actively with the institutional development activities of Citynet and Asian Coalition for Housing Rights (ACHR). He has been on several committees set up by the Planning Commission of India (on housing, urban development and urban poverty matters), was on the Board of Directors of Housing and Urban Development Corpration (HUDCO ) and has consulted with UN agencies, the World Bank, Cities Development Initiatives for Asia (CDIA), etc. He is currently advising the GoI on its 50,000 houses project for the war victims in Sri Lanka and is Chairman of the Committee for Rejuvenation and Strengthening of the Building Centres Nework set up by Hudco. He is Chairman and Chief Architect of Ksa Design Planning Services Pvt Ltd., an Ahmedabad based firm of practicing architects,with projects in various parts of the country and outside.

I am Neeta Pawar Chalke

I am Pakiri Samy

Com. N.P. Samy started his career in Bangalore in the year 1978 by organising and addressing the issues of the Urban Poor Communities who were leading a miserable life without any means of proper shelter, basic amenities, work related protection safety etc, and in the process the construction workers who were in a majority in the slums had to face severe hardship in their work and were often exposed to accidents , denial of wages, inhuman treatment, denied of basic working conditions , safety etc, and were exploited continuously by the employer and the society. His tireless and continuous efforts for a separate Legislation to the unorganised workers in the country by exerting pressure on the Union Government resulted in the enactment of “The Unorganised workers social Security Act2008”.

I am Sharad Mahajan 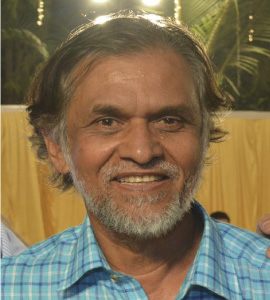